Industry forums are great fun. Apart from networking which is the norm every now and then you bump unexpectedly into someone special. Not an industry giant, but one who should have been one anyways. 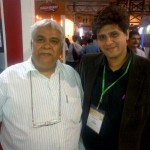 In one of the forums ironically titled “What is the next game changer”, as most of the so called giants were in unison as to say there is no such thing there was a lone figure with a plastic bag listening to the helplessness silently. At the end in the Q& A session he introduced himself as Mr. Shaikh Noor Ahmed… as just like you most of the people were flummoxed with his identity. It turns out Mr. Ahmed is the second generation owner of Baghdaadi the iconic restaurant in Mumbai. Content and happy Ahmed is no mood to expand his chain, much to the disappointment of my friend and colleague Rahul, who an avid foodie himself. But what Ahmed did do is regale us with some sweet nostalgic episodes of the good old times. Like the fact that Bade miyan came into being just because Ahmed’s father took an extra butcher’s permit from the British. Bade Miyan used to operate from under a banyan tree for years before setting up the joint that it has become. Or that there was an akhada just behind Taj was a long long time.It also was surprisingly pleasant  to know that quality issues like taste and even food temperature are not forgotten at Baghdadi with surprise checks being done. 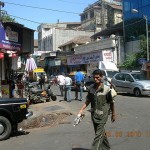 However as one was completely taken in by the passion of Ahmed, you couldnt help but be saddened by the fact that the sun is about to set on the iconic restaurant as the next gen of Ahmed are now well settled in Australia and the US. In fact, the one in the US is actually a computer engineer.

So, foodies savor away at this iconic restaurant coz not only does this one have no branches.. it seems unlikely that it has the will to go on any further.