The Legend of Babloo

Mayur , Daksh and I hi fived as we took our seats in the train on our way back. It was yet another successful safari trip. After all we managed to sight a few elusive birds, gleefully snapped away as a pack of wild dogs ripped apart a Sambhar deer, and we had 3 gorgeous sightings of the tiger.

One involved our guide and driver combo of Babloo and Ashish skillfully maneuvering our car so that we could see the tiger jump. The other was when Babloo correctly predicted a spot where no one went to see the tiger and gave us an exclusive sighting, and the third… Ooh that beauty of a beast, that third sighting, which actually was the first one we saw, was sheer masterclass in guidemanship from Babloo. Yea, there is no such word as guidemanship. But, that is the only word that can describe those 5 minutes. . And this post is just about that 5 minutes of brilliance.

The area we were roaming in belonged to a tiger called Prince. Now , Prince loves this small little Water hole where he comes to relax every morning. Curiously that day he decided not to make an appearance. Cars that were lined up for the spectacle gave up one by one. Babloo on the other hand decided to apply science at that moment. He asked his able companion Ashish to drive up to a canal 300 meters away. You see Babloo was convinced that the huge Prince had made the small gutter situated right below the road his home. He took pains to explain to us that Prince’s non appearance was because he was having a longer than usual siesta below the road.

Incredulous that theory! 40 cars are allowed per safari. In anticipation, 40 cars went up and down the road 3 times. How possibly could a tiger sleep peacefully we asked right below that road in all the chaos above? How could he sleep as the noise of the cars created a ruckus right over where he slept? This had to be another conspiracy theory from just another guide.

This brings me to the topic of guides. Anybody who has been on a safari will know the behaviour of a typical Indian guide. A typical specimen strides confidently into your jeep. The first 5 minutes he talks purposefully about the jungle and how he will show you your tigers in that safari. The next 30 minutes this specimen fafs gloriously about his wondrous sightings at points located every 5 minutes that the jeep traverses. Every 10 minutes the Royal specimen suddenly without warning stands tall on the seat of the jeep and asks you to be quiet as he listens to all the sounds that the Jungle throws at you. The next 30 mins you see his voice quality waning. The word LUCK starts to recur in his sentences. And after that, it’s just downhill. The transformation is astounding. It’s like Theon Greyjoy miraculously transforms to Reek. And before you know it , the specimen hops off the jeep without pleasantries. Shoulders dropped, arrogance gone, and no eye contact.

Babloo , however was not like that. The confidence in his science of tiger behavioural patterns unwavering. And as we stood there atop the small canal, Babloo had nothing in his mind but how to get Prince out for a sighting.

The tension was palpable. His confidence of the Tiger presence was supreme. He was edgy, and one could see a thousand ideas run through his brain. He thought of picking a rock but decided against it. And just then a foul smell pervaded the surrounding. Babloo was convinced it was Prince. For the record, in the 20 sightings I have had, I have never ever had a smell theory dished out by a guide. This is was beyond ridiculous now. Imagine, a tiger giving a foul odour. If that were true, the odour would have been enough to scare every potential prey away. Unconvinced, I refused to even touch my camera. Just then, Daksh, sitting on the back seat thought something crept beneath him and before we could realize it, the mighty Prince had made an appearance. So close, that Daksh later told us that his hands were shaking for the next 30 minutes.In 5 minutes Babloo had turned everything we had learned about Tiger behaviour upside down. Unwittingly, in 5 mins , Babloo had turned the mighty Neanderthalisque specimen of a guide into a science genius.So close, that my 300mm prime lens refused to focus on the majestic beast.. And when it did, all it got was its head. 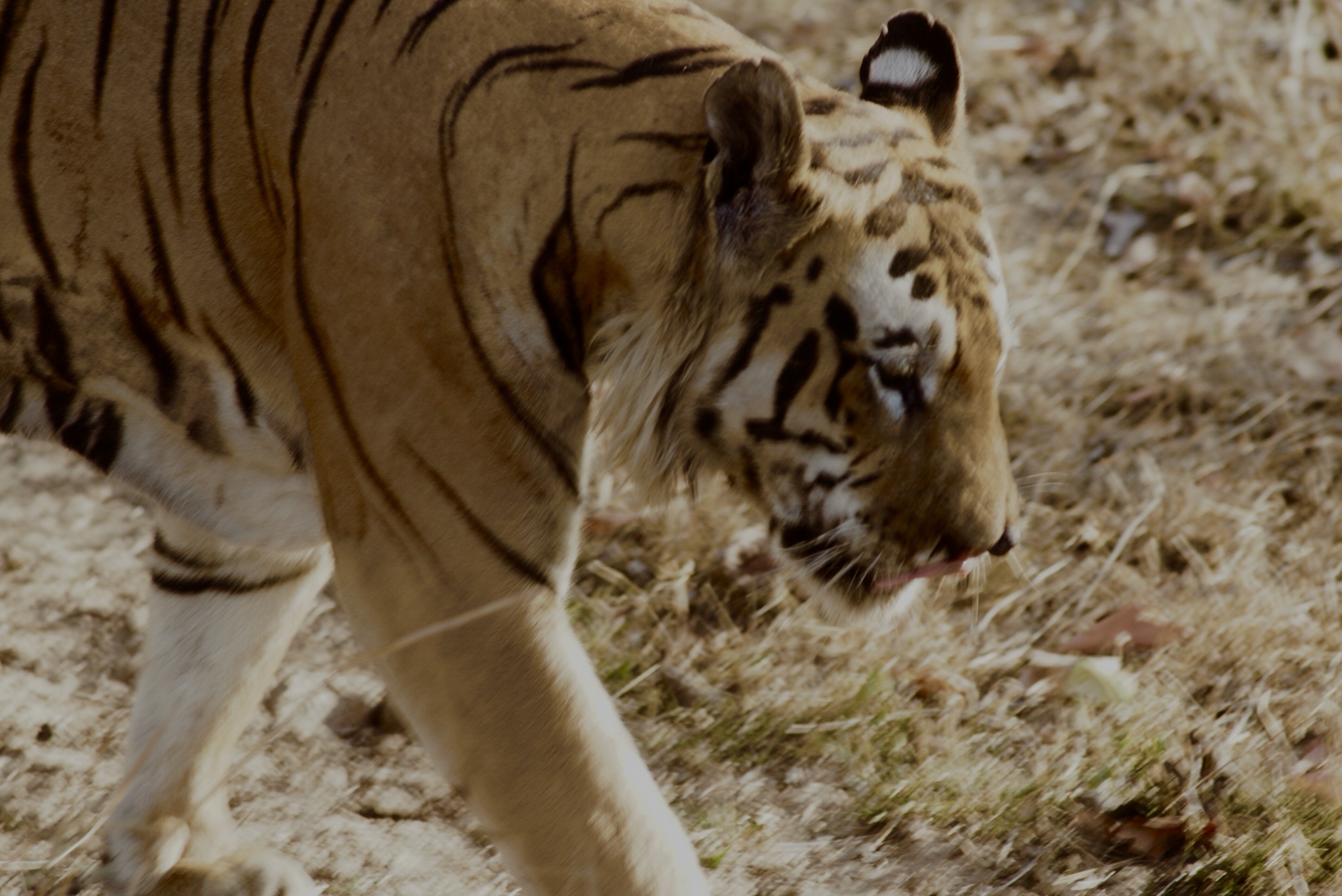 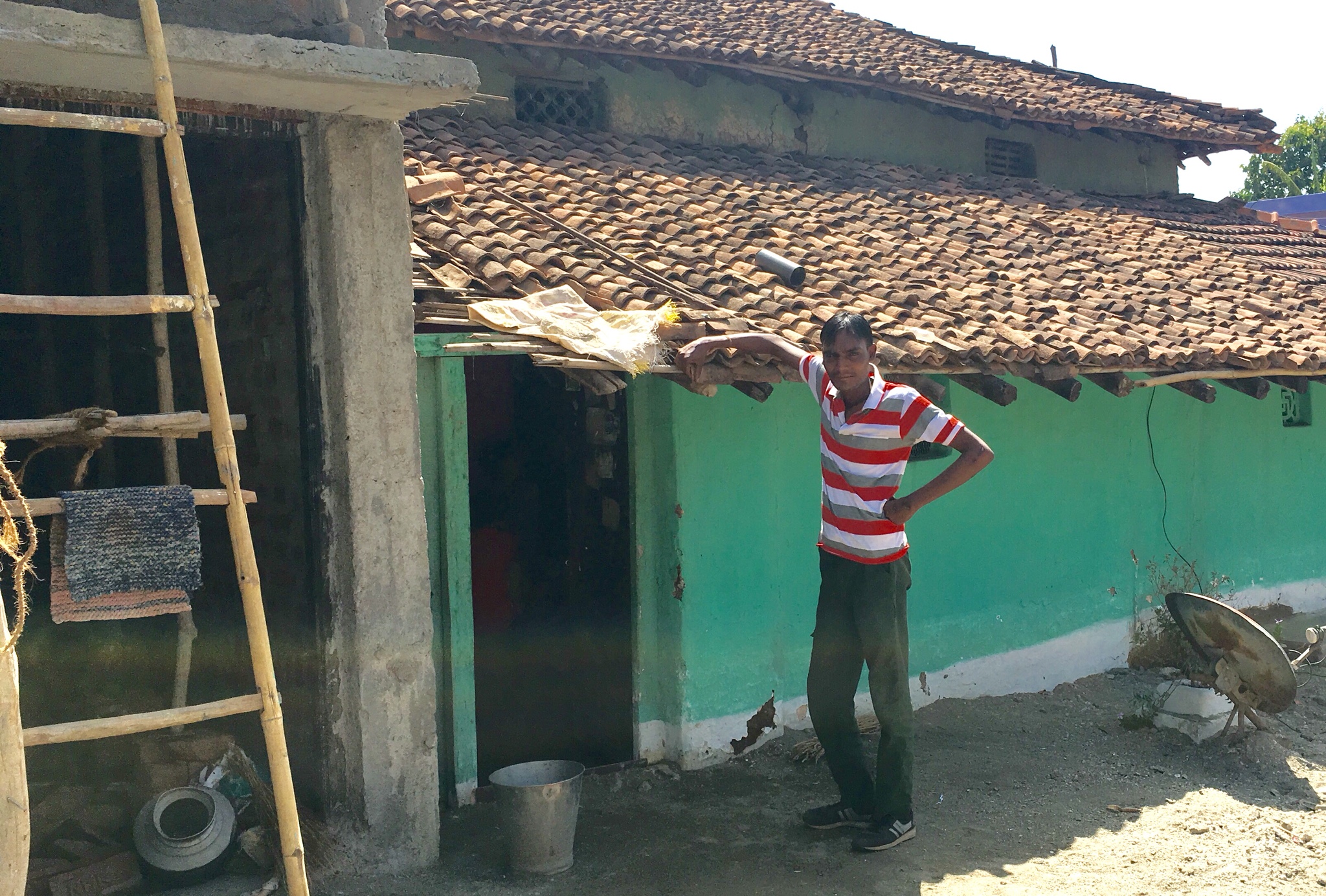 But But, Babloo as we were to learn later is way beyond a normal guide. His relationship with fellow guides and drivers is one of teacher and student. His pleasant demeanor means that he usually gets more leeway than others with government officials. He hosts guests for dinner. He took us to his home at 4 30 am for a cup of tea before the safari began … And he is special because in that tiny little town, the man with a large heart actually dreams BIG. Next to his modest home, Babloo is constructing a small homestay. He has thought of everything… A.C., Dinner under the stars on the roof, and rugged Indian styled furniture. It did eventually dawn on us that Babloo was a genius in the making…. An example that good guys do finish first. 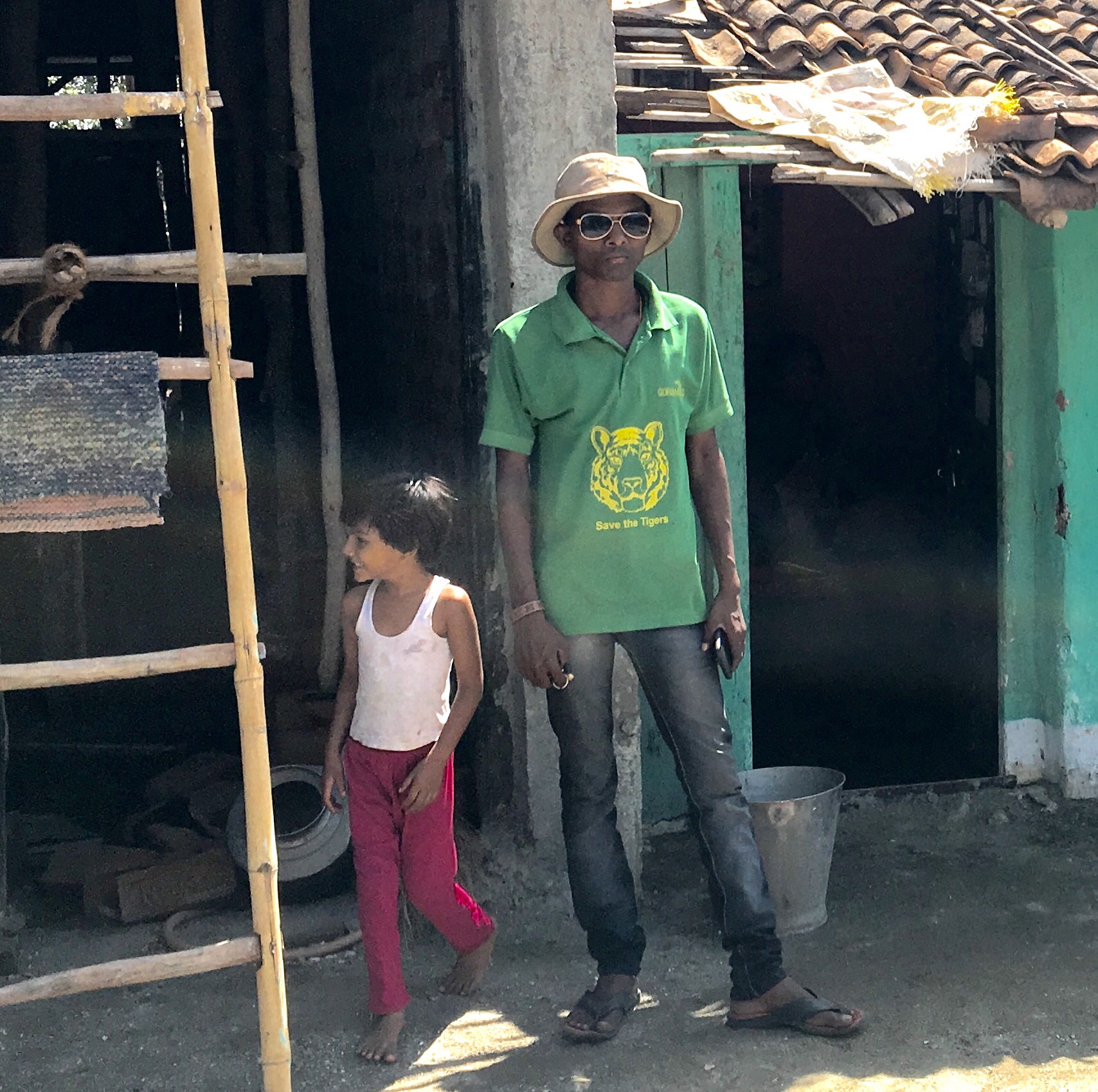 Heartily wish the man the best … And if you do decide to visit Pench in Maharashtra look no further than to employ the services of Jitendra Gupta… Yea that’s his name.

While this post was about Babloo, it cannot be complete without his partner in crime Ashish. Ashish wields the jeep like no one else. He consistently gave us the best seats in the house for viewing amongst the plethora of cars. His skills in tiger movement matched Babloo’s and apparently they are the Jai -Veeru Jodi of Pench. Understated, he hardly smiles. Speaks when spoken to. But he drives like a maniac with the single minded passion of showing you the Tiger.

Drivers and guides are the unsung heroes of Indian safaris. Their lives revolve around tiger sightings. They hardly sleep at night … And are required to be at their best as they take patrons out every day.. Twice a day. They also are the torch bearers of hospitality. Often their behavior decides if you will visit the jungle again. Most fail the task, and then there is the Legend of Babloo.

As always we thank Wildnest for another wonderful trip. Do contact them for their rides. Check them out on http:/www.wildnest.in