March 2009: In lieu of the elections the IPL miraculously was shifted to a entirely different country in a matter of days.

September 2010: With 15 days to go for opening, the world realized that the Commonwealth Village was in a mess. The Games were a disaster even before it began. Come 3rd October and India was ready- Again miraculously – We produced as the world says today – the most spectacular opening ceremony and  successful Games.

While it was Lalit Modi in 2009, it was the dynamic duo of Sheila Dixit and Suresh Kalmadi who pulled off the Houdini act in 2010. To the world it was a stunning achievement. A rabbit out of the hat they would say. To the average Indian it was merely an act that we repeat almost every single day… One that involves making a few phone calls, networking amongst those who matter, a never die spirit that says Ho jayegaa – also called as Jugaad.

Cut to the 27th of May then as our group of Fab 5 embarked on another remarkable road trip. But this post is not about the trip itself but a series of calls that lasted all of 20 mins  across 3 hours but was a lesson in the way we Indians use Jugaad in our everyday life.

A road trip usually has adventure written all over it. Even more so when we embark on a journey 5 hrs behind schedule without Hotel reservations. So at Midnight we realize hotel reservations are in order coz when we reach our destination at 3 am we will have only the road below and the sky above our heads .

The chief protagonist this time was.. umm Marshall. ( Lets stay away from names again

eh). Marshall by the way has this almost enviable ability to stay calm under pressure. Any pressure. And he builds it up on everybody by himself by using the now infamous words ” Koi stress nai hai” at the most inopportune time. The second and probably the more important figure is once again – Captain. An important player in this piece. Coz had it not been for him, there was no way the Jugaad would have been brought into play for our benefit.

1 am: Marshall makes his first call to a friend of his in Mumbai who has a hotel business in our destination. While his friend ( lets call him Contact) doesn’t have a room available he will be happy to help to us by putting us on to someone. Marshall ends the call by saying “koi stress nai hai ” , but help would be greatly appreciated

1:30am: Contact calls back giving us a number of Gentleman 1, who would give us a room. Marshall thanks him.

1:45 am: Marshall calls contact saying there is no response. If there is another way to help, great, else… well “koi stress nai hai”. Contact promises to call back in sometime.

2.00 am: We have reached our destination, meandering our way into the now desolate sleepy town. Contact calls saying there is a bungalow of Gentleman 2… and we can get a place there. Wonder of wonders we are right in front of the bungalow. We call the number but no one picks up. Marshall calls up Contact & says we got no answer.. but at 2 am there is little hope so if he can help any further great if not … “koi stress nai hai”.

And this is where Captain snaps as he breaks into 1 of the most hilarious but soul stirring 5 minute speeches that any man can give at 2 am. A man desperate for sleep for a shed over his head & in fear of the unknown that lay ahead. So soul  stirring that.. yep it was time for another call.

2.25am: We make a call to God who asks us to go to a hotel where arrangements have been made.

2.40 am: The door’s locked and no one is seen. So, another call to God who miraculously arranges every 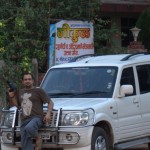 thing… doors are unlocked, room keys are handed over and we are in our beds before 3 am.

And, this my friends is how Jugaad works in the most miraculous of its avataars. Where people out of sheer goodness and just relationships somewhere, somehow know that 1 person who gets work done every time.. in the nick of time. I am not even gonna say try it, coz I know you will need it sometime – the day when you make that fateful call to god!

That's God in the center