Belief is a funny thing…

All my friends know me as a hardcore Cricket fan. All those who know me also know I am

famous for taking a walk or switching off the TV or not moving from my seat in tense situations… all so that the luck of the team I support changes or then doesn’t change. So, yesterday when Mumbai ( MI) took on Kolkotta (KKR),  at 104/4.

I went for my  customary 10 minute walk. The mood around the bar wasn’t too great either. People had their heads grounded and to them it seemed a wicket would fall every ball. In just the last match MI had hit 23 off the last over and even with the same man at the crease we weren’t comfortable with 24 required off 23 balls. The commentators didn’t make it any easier. Sachin had swished on a ball earlier and commentators went oooh, he needs to be careful. He did perish 3 balls later!

But here is the point, I was at the stadium for the MI – Chennai ( CSK) match earlier this month and nothing seemed impossible at the venue. Every 4 was cheered, every wicket was met with a roar. Even as Chennai put up resistance, never did we ever believe that MI never stood a chance to win that match. There was this belief that we just couldn’t lose and the wicket we wanted was just around the corner.

So after the blitzkrieg just 4 days ago why were we still chewing our nails… that’s when  I realized the difference. The difference between aided and unaided reactions.

With the commentators talking , emoting the way they feel every ball, one tends to feel the same too. Faces are zoomed on in TV, minute reactions ( sometimes unnecessary ones) are beamed in slow motion. And suddenly things look very different from what they really are. I am pretty sure that at most times, cricketers do not feel the same pressure that the average TV viewer does whilst watching a match.

When one compares that to watching a match live, you see with with an uncluttered belief. Belief that comes out of what you see LIVE. One where you see the player on the boundary asks you to cheer at the top of your voice. 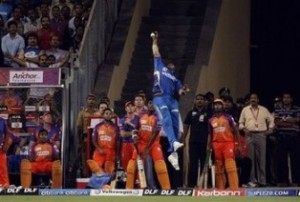 A raw energy where the impossible is the new normal… and that is what sport is all about. That raw adrenalin feeling where anything is possible – Just depends on where your belief lies. A place where a David knows he can slay Goliath every time he enters the arena.

Belief is really what you make of  a situation with an uncluttered mind… Let go of inhibitions and fear coz you never know what you could have achieved. Belief is all about listening to that one small voice which says he may be bigger or better.. but today I am going to win.  Don’t believe me…. Go to a stadium to witness that belief !