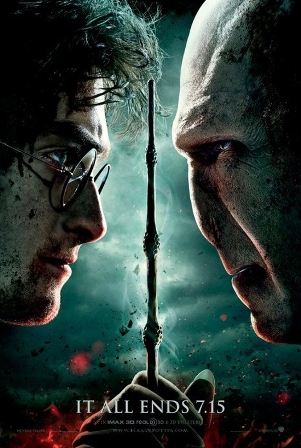 Have always refrained from comparing the book to a film as goes the saying.. Never judge a book by its film. So wont make the mistake  of comparing the 2 ever and even though have read all the books will only refer to the merits of the film(s).

So back to the movie now… It’s been a  glorious 11 years, the first one released way back in 2001 and the films have lived up to their standards and how. (wiki link to all the films). It was always going to be impossible to compress all that the novels said in 2 and an half hours, but what the movies consistently do was to bring alive every thought that Rowling would have had while writing the book. From watching Diagon Alley or platform 9 3/4th the first time to the magnificent Hogwarts to the super impressive entry of the competing schools in the Goblet of Fire or the sheer magic of seeing Dobby and other creatures come alive in alive in flesh and blood  ( spiders, Buckbeak, Fawkes, Nagini  and so many more…. see her

e) showed the brilliance what cinema can create. 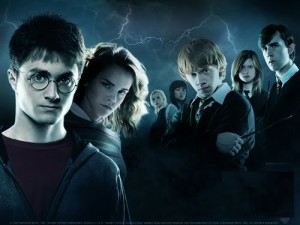 It’d be a disservice not to mention the actors who have grown wonderfully with each film.Kudos to the casting director to select an almost perfect bunch of actors who just seemed perfect for their parts 10 years in the running. From Harry, to Hermione to Ron to even parts played by Neville, Luna and Cho… kids when the franchise started but have matured into stellar characters. This is casting at its best.
I am not mentioning the senior actors because they are stalwarts and were expected to deliver just like they did. But a special mention to the seriously magnificent Alan Rickman for portraying the what I call the  ‘Karan’ character of the series – Severus Snape. The Diction – the Pause – the demeanor in which he embraced the character made viewers hate him as much as in the book.

And that was really what the films were about – Would any of us picture Harry or Dumbeldore or Hagrid any other way? I would seriously doubt that.

Seniors showed why they were the pros - Snape was Brilliant

The final installment was more than just Harry vanquishing Voldemort… It was the personal triumph of so  many characters whom we have loved over the ages. It was the moment for Prof. Mcgonagall ( we saw so little of her in the films! )  to vanquish Snape in a duel… For Snape to shed a tear… For Neville’s moment of Glory against Nagini, for Ron and Hermoine to be at peace at last while holding hands and for Harry who looks at Voldermort in the eye and says – Time to finish what we started Tom – to me this has to be cinematic brilliance even if it was borrowed from a book.

So, as the movie franchise draws to a close I wanna thank 2 people who have shared all of Harry’s woes and triumphs with me – my sister @pigtailedpundit with whom I read all the books and who always had the privilege of reading the book before she handed it over to me and my wife @da_babe with whom I saw every film since Harry potter and the Chamber of Secrets on the silver screen.

Adios Harry We shall miss you!

Its a bird… Its a plane.. It’s a Super Hero
November 16th
Foodilicious
April 22nd

The Movie Theory
January 29th
3 Comments On This Topic