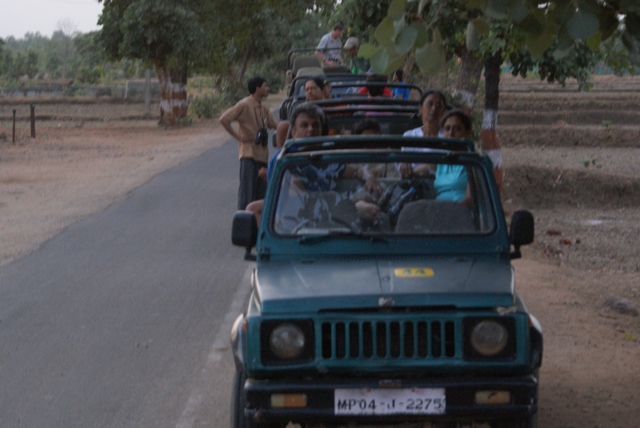 4 am starts. 5 am line up. 6 am checkin to office. 10 am checkout. 2 pm line up again.  7 hr drives on rocky roads. Imagine a life where every strategy starts with Telia and ends with well Paazahar. What’s that you say ?

For most safari and wildlife tourists or enthusiasts the few days they spend in the jungle are a bliss. 4 am mornings are supposed to refresh you. The sight of dawn in the jungle just revs up your brain with a plethora of ideas. Sightings of the Tiger and Birds of prey literally send a thousand tingling sensations to your brain. Like a recent ad goes: ALIVE IS AWESOME. Indeed.
But 3 days later the journey ends. For amateur photography enthusiasts , this may extend to 5 days. Maybe 15 for a professional… But city life returns for most. Now imagine someone doing this day in and day out all his life. 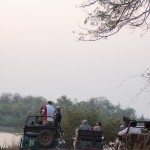 One tends to forget the men behind the wheel. They are the guys who make your sighting happen.

Ashish Dhamankar is 1 such person at Tadoba. At 27 he says he already has been driving for around a decade. Day in and day out, Ashish lines up his jeep almost an hour and a half before each safari in front of the gate with the sole intention of being the first one to enter the Tiger Reserve. The next 3 hours or so are reserved for some exceptional driving skills on the rocky jungle road. Not only is Ashish alive to almost every distant call that may lead to the elusive Tiger, he is constantly on the phone with drivers on different routes in the reserve talking about movement  and sighting. Tadoba , Maharashtra for the uninitiated is the hotbed of Tiger Sightings in India. It is rare to be in say 4 safaris and still miss a Tiger sighting. The forest is not as pretty as Kanha and the weather not as pleasant as Corbett, but boy what sightings. Ashish knows this and spends almost every bit of the 3 hr routine every single day, twice a day with the sole objective to reward his co passenger tourists with sightings. Telia, Paazhar, Tadoba gate, Overflow, Jaamanjora  and a few other words are all that his jargon mostly comprises of. There is little time to stop for birding though. Tiger sighting is all about patience, and Ashish and his ilk seem to know just about how much to stop and where to get that prefect sighting.

Now 10 years in the jungle has to mean hundreds of sighting, and yet his excitement on getting a nice sighting still matches yours. There’s little to life beyond Safaris though. 4 am starts mean the day ends by 8 pm, except maybe on Tuesdays when the reserve is closed.
Ashish is not alone. There are tons of drivers and jeep owners like him who do the same. It 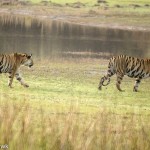 is mandatory for a guide to accompany you on a trip and so there are quite a few of them too. And I think it is fantastic how places like Pench, Kanha, Tadoba and others are breeding full fledged self sustained economic models where locals either become guides, or drivers or are employed by the forest department. Not only do these people earn a decent living and one where sightings result in they being blessed and showered with goodwill, they also do not need to leave the charm and beauty of their native place to earn their living in the already overcrowded urban cities.
And then there is Ashish’s brother Atul. Atul, a local of the Chandrapur area is a homegrown naturalist. He live and breathes Tadoba. His knowledge of the jungle is extensive as so is his prediction of Tiger movements. In fact, it was his prediction of where the Tiger would come that gave us an exclusive 5 ft away breath taking view of not 1 but 2 tigresses. A photographer who actually conducts study tours around India and not just in Tadoba, Atul is a shining example of what an enterprising man can achieve no matter how small a town he comes from. Atul also helps in booking end to end safari tours in Tadoba.
It’s a jungle out there all right, but the life and times of the people serving the tourists are far from jungle like. An epitome of humility and courtesy, the services rendered by the small literally put together cottages that serve as resorts are on par with the best that 5 star hotels have to offer sans of course the glitz, plastic smiles and well groomed uniforms. These people are all heart.
A final word on the traffic rules. Unlike the mad driving that we see in cities, traffic laws in Jungle raj are actually very good. No backing up, no overspeeding, no undue overtaking, and reporting times both in and out are strict. A violation of any of these lead to serious repercussions- from termination of license to operate a vehicle to suspension of driver’s license to enter the jungle. These can be overturned only by months of rounds to the Mantralaya. Remember, this is their only means of earning bread. What this results in is that almost every guide and jeep driver follows rules to a T and there is little chance of over zealous tourists coercing or even bribing them for longer times or backing up for better sightings.
Early starts. Early lights off. Earnest workers. No bribing. No breaking of laws. Work opportunity for locals…. Jungle Raaj may not be be a bad thing after all now. Would it ?
Atul can be contacted on: 076 20 792206
email /FB: atultiger@rediffmail.com / http://facebook.com/atul.dhamankar1